This morning I was en route to the Service Ontario counter at Ottawa City Hall.  I needed to extend OHIP coverage for my trip to Costa Rica.  Ottawa City Hall is right near Confederation Park and I decided to check it out.  Two days ago I wrote a blog post about the day after the eviction and received a surprising amount of traffic on my site.

That night, or rather the next morning, Ottawa Police served the notice and removed the remaining protestors.  For context, the first night of the eviction there were 200 people in the park to resist, the second night there were 25.  Police made eight arrests, by that I mean they cuffed eight people and dragged them out of the park then uncuffed them and told them to go home.

There was one guy, named Obert Madondo, who was charged under the trespassing act and fined $65.  He also had to be taken to hospital after an incident during the arrest.  He claims police treatment caused injury, he was taken to hospital and released later with his arm in a sling.  The police claimed in a press release that the arrest aggravated a pre-existing condition. There is a video of Madondo leaving the emergency room at Ottawa General hospital here, and his statement.

Either way things happened largely the way the Ottawa Citizen hinted they would, not with a showdown and epic last stand, but rather remaining protestors were quietly removed and ticketed in the night.  It was sad to see it end that way somewhat.

Ottawa, ON - A women walks by the impression in the snow left by the medical tent from occupy Ottawa on November 24, 2011. Confederation Park, which reopened a day after protestors were forcibly removed, was the site of the 38 day long protest. On November 21, protestors received eviction notices, Police arrived at 2:30am November 23 and served the eviction notices then closed the park for cleaning. The next morning it was open again, the only visible signs of the occupation were impressions left in snow by the tents of occupy Ottawa.

While I was at the park I was trying to find a photo that included some evidence of the 38 day occupation that had ended only 48 hours ago, there was almost nothing.  I noticed some areas in the snow, squares and circles where there was no snow, these were footprints of the tents that had been there the night before.   I started photographing some of the footprints of tents I had photographed two days earlier when suddenly a passerby started to shout at me.

She indicated there was a cute squirrel eating a peanut (it was actually eating a cookie) in a tree, she was hinting that I should photograph that instead.  I humored her and she remarked, “Isn’t it nice to have the space back again?” before leaving. 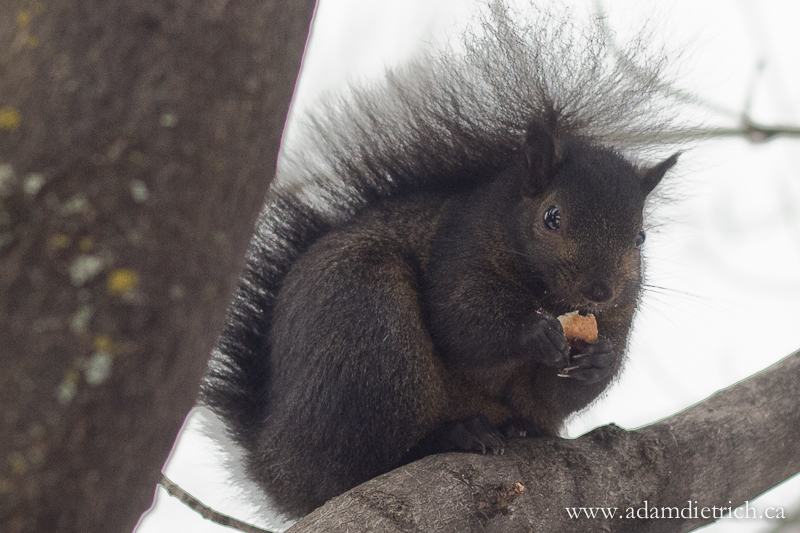 The photo is cropped a lot, and was shot with Canon’s ‘thrifty fifty’ 50mm f/1.8, so there’s some gross chromatic aberrations at this crop…  Its a good thing I ordered a 135mm f/2.

As a final note, early in occupy Ottawa’s infancy I took a proactive role in the media committee.  At the time I felt documenting the creation of this alternative society was what I had to offer.  There is a flickr photostream, where I uploaded most of my photos but here is one I liked.  It was taken at a march on October 19th before the movement in Ottawa started to drift away from the so-called 99%. 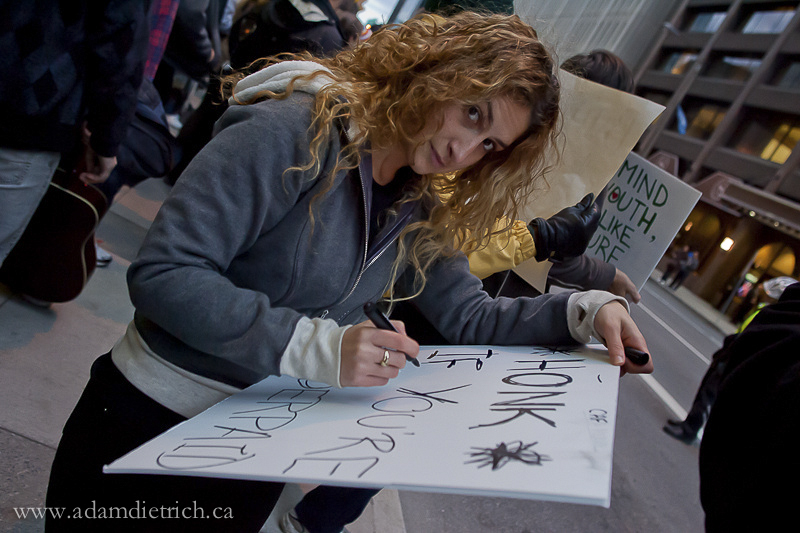 Ottawa, ON - A women writes the words, "Honk if you're underpaid" on a sign at the corner of Queen and O'Conner on October 19, 2011. Occupy Ottawa protested outside the Sheraton hotel, denouncing a conference hosted there which was promoting greater economic integration with the United States.

That’s it for today.