August has dawned, nights are cooler and days are getting shorter, as is my time here in Toronto.

This past week I got to shoot the Rogers Cup.  It was my first time shooting a world class sporting event.  I’ve photographed University level sports and even professional level hockey with the Belleville Bulls, I even once photographed a Raptors scrimmage in Ottawa but nothing at this level or speed.

Germany’s Anna-Lena Grönefeld returns a ball during the final round of the women’s doubles at the Rogers Cup at Rexall Centre on Sunday. Grönefeld and her Czech partner Květoslava Peschkeová lost to Serbian Jelena Janković and Slovenian Katarina Srebotnik. (August 11, 2013)

To say it was a challenge is an understatement, not only have I not photographed sports at this level before, but I’ve never taken a single picture of people playing tennis.  Ever.  I had ideas of where to stand and which pics to get but factoring in my ignorance of the game and the insane speed of the players it was a bit of a challenge.  After ten minutes of fumbling around and getting lots of pictures of returns with no ball visible I started to anticipate better and they started rolling in.

Romania’s Sorana Cirstea wipes away tears after being defeated by America Serena Williams at the women’s single final of the Rogers Cup at Rexall Centre on Sunday. (August 11, 2013)

My biggest disappointment was not getting to court level in time to see Serena Williams play.  I had a job at the same time her match started, and I wanted to do a good job of both assignments.  By the time I drove to North York (30 minutes from the previous job), parked, got my media pass and got in she was well on her way.  My route to court level took me past the top of the upper bowl so I snapped a few pics just in case I couldn’t get lower in time.  As it happened by the time I had all my passes and was in the right place, her match was over.  Although I was court-side for her accepting the trophy and for the doubles match which followed. A full gallery of what I filed is online here. 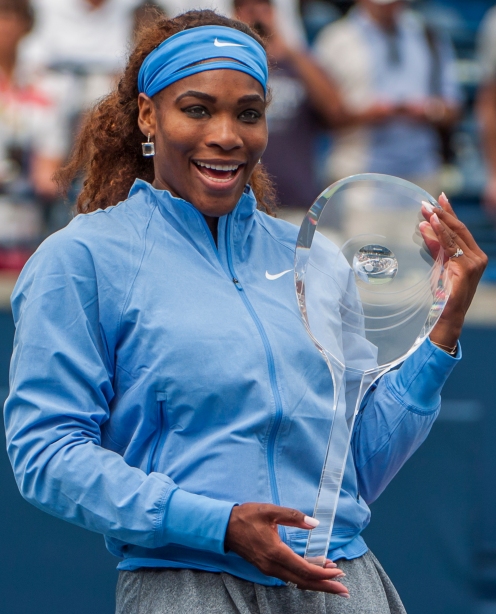 Serena Williams celebrates with the Roger’s Cup after defeating Sorana Cirstea 6-2 6-0 in the women’s single final at Rexall Centre on Sunday. (August 11, 2013)

Earlier that day I attended a Catholic Mass at St. Clare’s church, they were celebrating their 100th year anniversary.  It was double booked for me though because the Roger’s Cup Women’s Final started at the same time as this assignment.  Somehow I managed to be in two places at the same time.

Father Vito Marziliano, right, accepts a book from a parishioner during a mass celebrating the 100th anniversary of St. Clare’s Catholic Church on Sunday. The church marked it’s centennial with a solemn mass and and unavailing of a new statue of St. Clare. (August 11, 2013)

It was interesting, I find faith and religion fascinating and Catholic Masses are so ornate and full of ritual.  Having some degree of access near the alter was really enjoyable.

Parishioners pray during a mass celebrating the 100th anniversary of St. Clare’s Catholic Church on Sunday. The church marked it’s centennial with a solemn mass and and unavailing of a new statue of St. Clare. (August 11, 2013)

On Friday I was at the opening of the Taste of Danforth, a huge Greek food and culture festival in eastern Toronto.  The festival was opened with an event called the Danforth Dash.  Corporate teams of four raced hospital beds down Danforth Avenue to raise money for the Toronto East General Hospital Foundation and to be the winners of the coveted Gold Bed Pan Trophy. 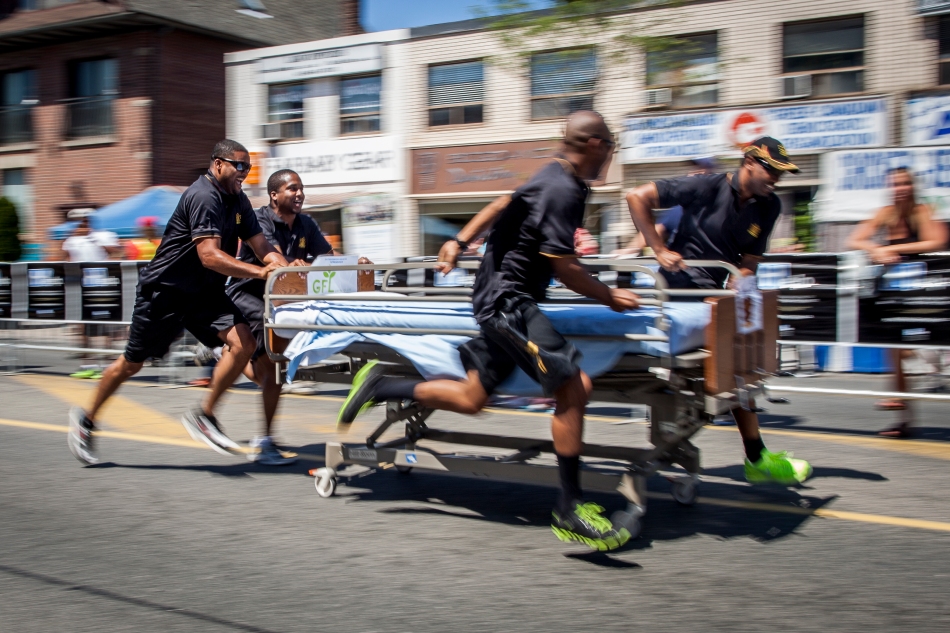 The Amalgamated Transit Union team races a bed down Danforth Avenue during the 7th annual Danforth Dash on Friday. The event opened the Pilaros Taste of the Danforth festival and raised money for the Toronto East General Hospital Foundation. (August 9, 2013)

Rewinding a week earlier, I was out on feature patrol looking for standalone to help fill space.  I’d wandered over to the Ashbridge’s Bay Skatepark down by Toronto’s beaches.  Usually I have good success with the skateboarders there, but this time there was nothing.  So I wandered up to one of the upper bowls in the park and found a scooter team doing tricks, they were really good, so I asked to take some pictures,  one kid eagerly hoped in and promptly did a backflip for my camera.

Jack Kelly a scooter rider with Scooters Canada does a back flip in a bowl at Ashbridges Bay Skatepark on Sunday. The Scooters Canada team was on a province wide skatepark tour, doing demonstrations in six skateparks in three days over the long weekend. (August 4, 2013)

The day before I was down at the famous Caribana festival for the grand parade, due to a logistical issue I spent over an hour waiting outside.  It turned out the media check-in booth was inside the paid admission area, which I wasn’t able to access until I picked up my media pass from the media check-in which was located in the paid admission area which I couldn’t access…. The only way I got out of that repeating loop was because a photographer friend of mine who had a pass went into the event and came back with mine. 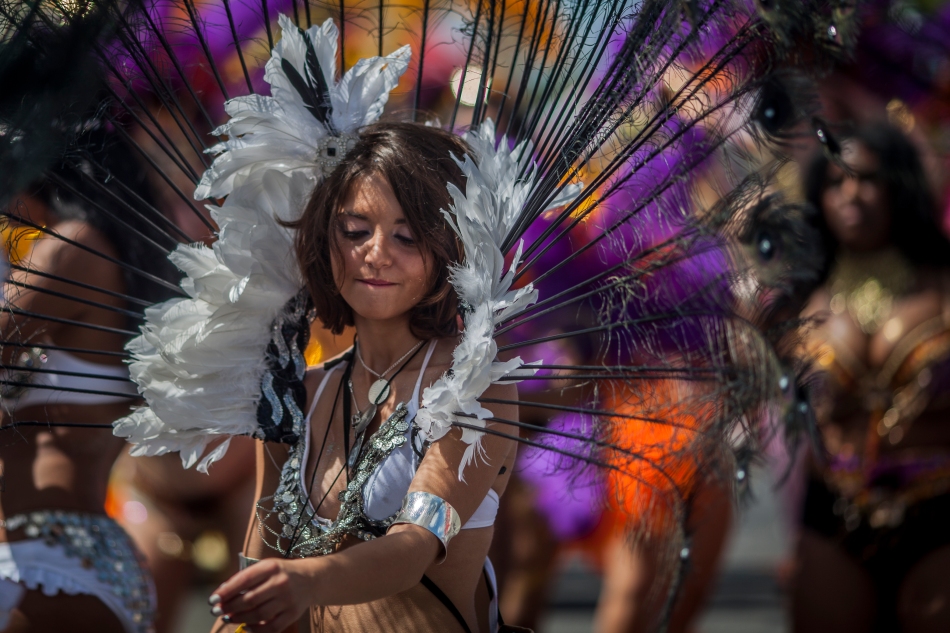 A masquerader performs on Lakeshore Boulevard on Saturday during the Grand Parade of the Scotiabank Caribbean Carnival. (August 3, 2013)

That headache set me back and meant I was only able to spend little under an hour at Caribana, and never quite got into the vibe.  Maybe next year?

A masquerader performs on Lakeshore Boulevard on Saturday during the Grand Parade of the Scotiabank Caribbean Carnival. (August 3, 2013)

My week that week started in the extreme ends of Toronto.  On Thursday morning I headed into Etobicoke in Toronto’s west end, it was my first time working in this part of the city.  Seems a local boy, Dave Bolland, was in town with the Stanley Cup.  Bolland won it playing with the Blackhawks, but everyone there was excited because he had just announced he’d been traded to the Toronto Maple Leafs.  The crowd was a mix a dejected Blackhawks fans and hopeful Leafs fans.

Did I mention it was Etobicoke on the day of the by-elections?  Rob and Doug Ford were there leading the parade and campaigning for their guy Doug Holyday who ended up winning Etobicoke-Lakeshore.

Mayor Rob Ford waves at people on Mimico Avenue as he leads the Stanley Cup Parade on Thursday. (August 1, 2013)

That gave me the rest of the day and evening to get across town into Scarborough where another by-election was happening.  It was my first time shooting political news, unless you want to count student council election at Carleton University.  It was intense because I was fighting with crowds and other photographers.  I know a few of the photographers ended up on insanely tight deadlines because Mitzie Hunter arrived late to the after party (by insanely tight I mean they had 15 minutes to shoot, file, edit and transmit).  For my part Inside Toronto wanted their pictures that night as well, although I was had more time.

The last two weeks have been busy but good, with a few bigger assignments.  While the stress level is always much higher with these types of events so is the reward.

That being Said I’m now into the last two weeks before school resumes and the summer job ends.