July 8 I continued covering Bluesfest with a solid Friday evening lineup.  In the early evening there was Chicago punk, Rise Against and in the evening the Black Keys.

I was pumped for Rise Against.  I love punk music and I’ve been listening to Rise Against since the seventh grade.  It’s true that they’ve changed, lost much of their edge and commercialized.   Regardless its always awesome to photograph an artist you grew up with.  the band seemed to recognize the diversity of their own fans in attendance and played a fair number of older songs as well.

I last saw them play in 2004 behind Siren Song of the Counter Culture at Elements nightclub in Kitchener, I was 15 I think.  The music has grown somewhat poppier, but I have to admire their longevity.

Ottawa, ON - Tim McIlrath of Rise Against performs on Friday July 8, 2011 at Bluesfest. (Adam Dietrich/the charlatan)

They had a lot of energy, which after 12 years is impressive.

Ottawa, ON - Zach Blair of Rise Against performs on July 8, 2011 at Bluesfest. (Adam Dietrich/the charlatan)

And as always with punk shows… the crowds are nuts.  I had some kids fall out of the crowd onto me while I was shooting… 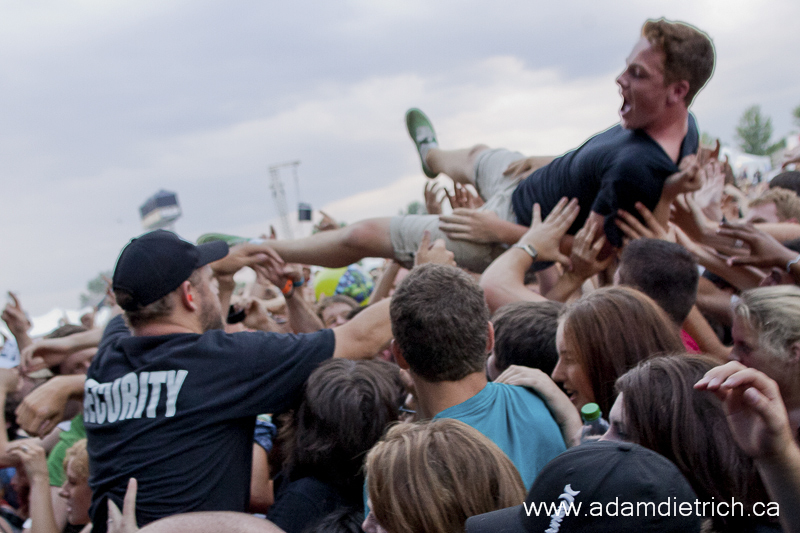 Ottawa, ON - A crowd surfer is pulled into the stage pit by a Bluesfest security guard during a performance by Rise Against on July 8, 2011. (Adam Dietrich/the charlatan)

Then came the rain…  I was backstage at the MBNA stage around 9:15 waiting for the Black Keys to take the stage.  Suddenly gale force winds swept up and intense rain started.  I hid under a fence like a lean to with a few other photographers.  Then around 9:30 the cables on the left side of the MBNA stage broke lose under the pressure of the wind.  Security freaked and pushed all the gathered media back about a hundred feet while they tried to fix the problem. 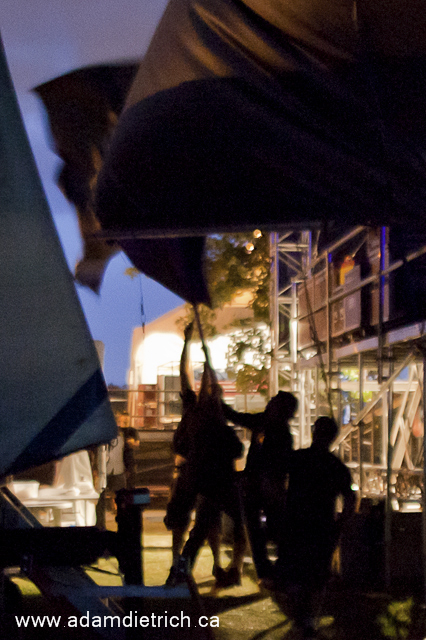 Ottawa, ON - Four members of the Bluesfest stage crew attempt to control a canvas flap which flew loose prior to a performance by the Black Keys on July 8, 2011. Torrential rain and gale winds delayed the outdoor performance by more than an hour. (Adam Dietrich/the charlatan)

So after an hour of that crap it seemed like the Black Keys weren’t going on and I had plans for later in the evening.  I left at 10:30, around 10:40 they went on stage.  Fuck.  And lesson learned.

Sunday was a much drier affair.  I was there to see the Dropkick Murphys (speaking of longevity in punk).  From Boston, they play punk infused with Irish folk, its a cool combination and anyone who has seen The Departed has heard their song, “Shipping up to Boston.”  I was pretty excited to see them.  There were a lot of mohawks, Bruins jerseys, green shirts and even kilts out.  Ken Casey jumped in the crowd but I missed that one… I think I was drinking and dancing with some friends by that point.

Ottawa, ON - Al Barr of the Dropkick Murphys performs at Bluesfest on July 10, 2011. (Adam Dietrich/the charlatan)

Ken Casey was an ass and talked about how great it was to gloat about Boston’s win in Canada.  Good thing they were in Ottawa not Vancouver.

Ottawa, ON - Ken Casey of the Dropkick Murphys performs at Bluesfest on July 10, 2011. (Adam Dietrich/the charlatan)

I discovered too I’m having camera issues.  My EOS 1D MkII developed an error 99.  Error 99 is a terminal disease for Canon cameras, I had one with my 30 D last summer and the camera just started to degrade and break down rapidly.  I’ll have to send it into Canon, depending on the cost of a refurbishment it may be worth it, it’s been a good camera.  Also i’m not sure if this is related to the error 99 or not but my 50mm and 70-200mm no longer work well.  There is a small black circle in the view finder covering up the light meter.  Even still the exposure meter is inaccurate and the autofocus won’t work.  However, I put those lenses on my EOS 1N (old film news camera) and the lenses work fine.  Also my 24mm works fine on the digital.  Ergo, it has some problem with lenses that use compression and concave glass.

If it’ll hold out a month I can send it off and finance a 5D MkII… Fingers crossed, knock on wood etc.

Because there’s still Bluesfest and other things!