A day at the races…

The wonderful people I’ve been staying with suggested the other day we go see some motorcycle racing…  It’s a HUGE sport in Northern Ireland and kids as young as 13 race.  We piled into vans, packed up a BBQ and went to the east coast.  The fun part to was the connection.  Katheryn in the eldest daughter of the family, last year she got married (I remember meeting her future husband then boyfriend 5 years ago).  They’re pretty wicked people and Andrew (her husband) has always raced bikes.  Though he doesn’t race in the fastest class of bike I still couldn’t believe the speed!  Thank god the light was nice, I was shooting at some crazy settings… f/ 11 ISO 400 S. 1/8000.  Yeah that’s the unbelievable light in this country.  Anyways, I’d never shot motorsports of any kind and it was hard just to keep the camera trained on the riders, plus once the family saw my gear they made the [correct] assumption that I’d be able to get them a good shot or two… Andrew was racing with more than 10 other riders, so I climbed on top of the cargo van we had driven there then tried desperately to find 93 in the pack.  It went a LOT better/easier than I had anticipated.

View of the N. Irish coast at low tide near Belfast

On July 12, 1690, King Willem of Oranje, who was the protestant Dutch king of England (by marriage) crossed the Boyne river in Ireland near Dublin.  On the other side was catholic King James II, who had been king of England until his son-in-law, Willem of Oranje disposed him.  By the end of the day James and what was left of his army were routing and Willem and his army were marching to Dublin, thus began English dominance in Ireland.

While some 320 years have passed since that day the wounds have yet to fully close.  On July 10th, 2010 a small bomb exploded outside the small town of Armagh in Northern Ireland, while it killed no one fears remain that the bomb was intended to stoke the fire of violence yet again.

In 1916 an event known as the Easter rising occurred.  It was a declaration of independence taken by some in Dublin, for the British crown it was treason.  13 of the 14 main revolutionaries were executed, this display of state violence and remorselessness (one rebel injured from the fighting had to be tied to a chair before being shot) lead to further unrest and in 1922 the UK had no choice but to allow the succession of the Irish Free State.  In 1937 the Irish Free State left the British Commonwealth and became Ireland.  247 years after the Battle of the Boyne Ireland was again free, mostly.  The British kept the northern counties of Ulster which became known as Northern Ireland.

Between 1937 and the sixties there was not a lot of violence as Ireland was establishing itself and both sides were coming to terms with new order.  However, certain members within the republic felt that Ulster belonged to Ireland, they were determined to take it back.  Equally determined forces on the other side felt that Ulster was part of the UK.  The stage was set for what became one of the most convoluted conflicts in western history, including the longest continuous deployment of British troops ever. 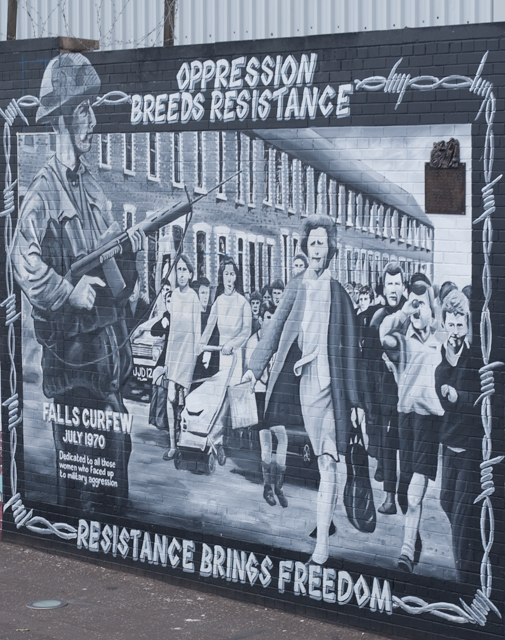 Pro-republican mural painted on the side of a building on Falls Rd. in West Belfast.  During the Troubles Falls Rd. was the epicentre of republican support in Belfast and a flashpoint for violence.

So who were the groups involved? While that depends on the timeline, there was the Irish Republican Army (IRA), the Ulster Volunteer Force (UVF), the Ulster Volunteer Association (UVA), the Ulster Defence Regiment (UDR), the real IRA, the Irish National Liberation Army (INLA), the Loyalist Volunteer Force (LVF) and many more.  The key ones were the IRA which was operating for a long time with the consent of the Irish state, the UVF which was an anti-republican paramilitary operating mostly in Belfast and the UDR which was a militia organized by the British Army who has now been accused (with some evidence) of supplying targets and weapons to the illegal UVF. 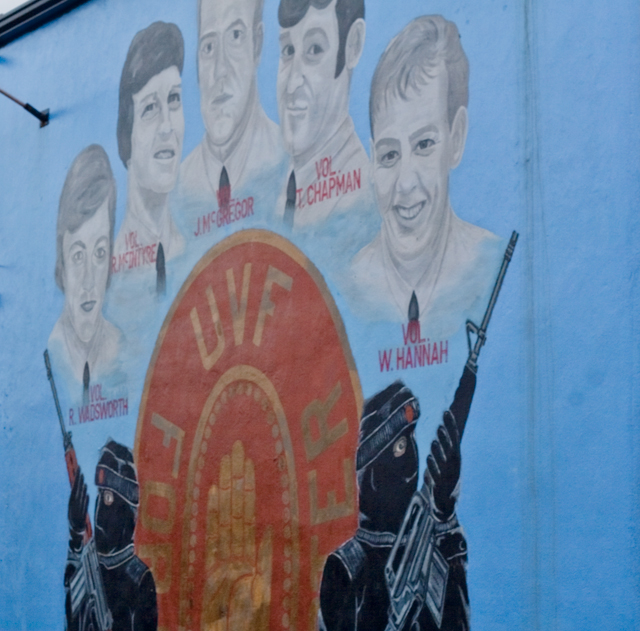 A UVF mural painted on the side of a building on the Shankhill Rd. in West Belfast commemorating fallen UVF fighters.  Like Falls Rd. Shankhill was also a flashpoint for violence, however, it’s inhabitants were Unionist protestants.  The UVF is one of the paramilitaries involved in the Troubles and considered a terrorist organization by the UK. (Photographers note: my apologies for the bad framing this was shot from the top of a moving double decker bus and I wasn’t able to fit the whole mural in)

So what’s the damage?  Recently in a trip from the north coast of Ireland our local guide and family friend specifically avoided driving through any remotely republican communities.  A former member of the UDR he was targeted more than two decades ago by republicans with a car bomb, it exploded prematurely and he survived.  Whilst wandering though a catholic community a week ago he remarked, “the last time I walked here I was carrying an SLR [automatic rifle].”  Suffering from post traumatic stress disorder, he’s been on a variety of medications and now almost two decades after leaving the UDR is starting to find some peace.  This is just one man.

On a grander scale some 3 526 people lost their lives, of those the greatest proportion were civilians with some 1 842 killed.

More than four decades of terrorist acts have left deep scars on cultural face of Ireland, U2’s Famous song “Sunday Bloody Sunday,” which is about the murder of 13 demonstrators in Derry (also called Londonderry) on January 30, 1972.  In a recent report released a few weeks ago British Prime Minister David Cameron apologized, admitting that British paratroopers fired on innocent civilians.  The Cranberries song “Zombie” was a lament for the continuing troubles in Northern Ireland written in 1994.

A section of the ‘peace line’ which was a series of walls, razor-wire and military checkpoints set up in 1970 to provide a barrier between the Falls and Shankhill Roads.  Most of the installations along the line have been removed following the 2005 disarming of the Provisional IRA.  The dismantling of the line is part of an on-going process called normalization, however, some community groups have petitioned to keep the wall.

In 1998 the Good Friday Agreement was signed and a cease-fire was supposed to begin.  However, dissident groups continued to murder civilians, the worst bombing of the troubles occurred, a group called the real IRA set off a bomb in Omagh which killed 29 civilians including unborn twins.

Since 1998 there has been a slow but steady decline in violence.  Bombs are still detonated by dissident groups claiming affiliation to various paramilitaries, however, the IRA, the UVF and many others have disarmed.  Several countries were involved in the peace process acting as intermediaries including Canada.  Our contribution, outside of mediation, was a hockey team and arena in Belfast.  While it may seem a little silly, ice hockey is an alien sport in this country, and in being an alien sport it means there are no pre-existing rivalries nor tensions that exist with football or hurling clubs.  Since 2000 the Belfast Giants have enjoyed a lot of on-ice success and bring in crowds consisting of both protestant and catholic and loyalist and republican sides, plus I think the Irish like any sport where you can drop gloves and bare knuckle box.  The Odyssey arena which is home to the Giants also provides a place for concerts and big name acts. 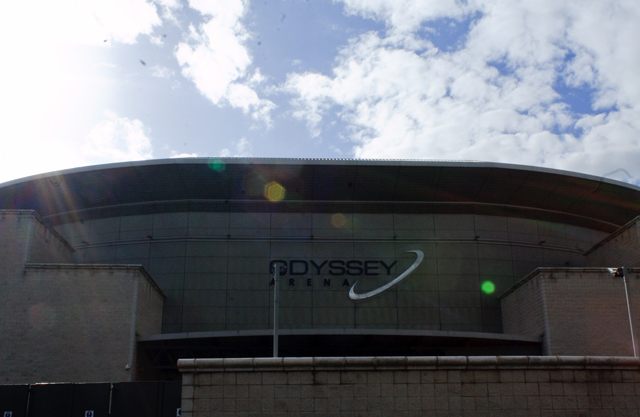 The Odyssey Arena, built with the help of the Canadian government following the Good Friday Agreement.  It’s home to the Belfast Giants hockey team which plays in the UK Elite League.  Considered a major step forward in the peace process in the upcoming year the arena will host the Boston Bruins, Shakira, Rod Stewert, Guns ‘n Roses and Lady Gaga.  In the past major acts like those avoided Belfast due to the violence and residents are enthusiastic about their appearance.

So when Orangemen march through the streets of Ulster towns in support of Willem of Oranje’s conquest of Ireland, this is why it still angers some and enthuses others.

Peace has come to Northern Ireland, there are a few determined dissidents who are still working to unravel that, however, they will be unsuccessful.  Because, whatever your religion or political alignment, the people in this country are tired of burying loved ones and 40 years of bombs will take the piss out of anyone.

A picture of a picture.  This is a photo of Ian Paisley (left) and Bertie Ahearn an MP for Dublin Central during the opening of the Battle of the Boyne visitors centre.  Paisley presented Ahearn with a book and Ahearn presented Paisley with a gun from the battle.  The meeting was importent as it showed two sides coming together over the site where one might argue the  troubles truly began.

Writers note: this is a horribly short and nondescript version of the troubles which does a terrible job of explaining the true complexities of the situation.  Though I understand the risks of over simplifying the more than four decades of violence experienced by the north Irish this has been condensed to represent my interactions and understanding of the troubles.  Other issues include the funding of the IRA by the United States, international collusion between the IRA and the Palestinian Liberation Organization and the peace process among other things. For those interested there is a wealth of information available though I offer this caution: most of it is heavily biased, look for the slant.

Info on deaths and names of groups:

A Short History of Ireland by Seán McMahon

***this is my first attempt at solo reporting, comments won’t be published though they will be greatly appreciated***